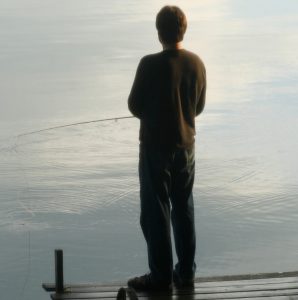 Not all of my early reading experiences were nurturing. Each summer, my Uncle Roland invited my father and one of his three sons on a fishing trip. When I was nine it was my turn. My brothers had told me what a great time they had. Uncle Roland was funny and he really knew how to catch fish. Great fun, right? Well, being me, I put three thick science fiction books in my pack in case I got bored.

Well, about half an hour into the fishing trip, I got bored. It’s true that Uncle Roland was funny. In fact, I’m sure now that his off-color jokes were meant to signal to me that I was old enough to be treated like a “man” and not a “child.” And we did catch fish. Well, Dad and Uncle Roland did. Me, not so much. Why? Because I sat there in the bottom of the boat, fishing rod resting on the side of the boat, my nose in a book, and not paying much attention to the subtle signals traveling up my line. “What’s the matter with you?” Uncle Roland asked. “Don’t you want to catch fish? Put that book away and pay attention.”

I’m sure Uncle Roland meant to be helpful. In his mind, he was initiating me into an important experience that would help me become a man. But not just any man, the “right” kind of man; the kind of man he was. Don’t get me wrong; Uncle Roland was a voracious reader. He was self-educated; he read widely, and not only in plumbing and heating systems, his expertise. He read history and politics. But he didn’t have much time for literature. His success as a businessman was a product of native intelligence and the insights and ideas he gained from his reading. But it was equally a product of his aggressive, competitive approach to business.

Looking at me, sitting there, most of my mind parsecs away in a piece of science fiction, letting fish off the hook, he must have thought that my devotion to reading wasn’t quite manly enough. That if I was to be successful in life, my interest in reading needed to be tempered by an interest in the world beyond me. My Dad looked at me. I put my book down and tried to focus on fishing. But what I really wanted to do was get back to the adventures of Valentine Michael Smith in Stranger in a Strange Land.

That day passed, but it sticks in my mind 40 years later. Uncle Roland surely meant to be kind, and to tell the truth, I don’t think I let his criticism affect me much, despite how much I admired him. But I wonder how many other kids, less secure in their devotion to reading, might have been put off by his remark, and thought something was wrong with them when an admired relative or mentor shamed them for reading.

Kids find adult sponsors of literacy everywhere. And because they care for kids, adults often feel entitled, even obligated, to project their ideas about reading and writing on them. Despite his own experiences of reading, my Uncle Roland feared that what he saw as my over-investment in reading, especially the made-up worlds of science fiction, would make me unfit for success in a real world where men used their wit and strength to compete with one another. I did OK. Today, I’m a professional writing coach, and I like to fish as much as I like to read.

But adult sponsors of children’s literacies should be mindful of how their own hopes and fears shape their approach to sponsorship. Adults engaging children in literacy activities should aim to support the child’s emerging sense of self, rather than steering them in a direction that meets the adult’s expectations.